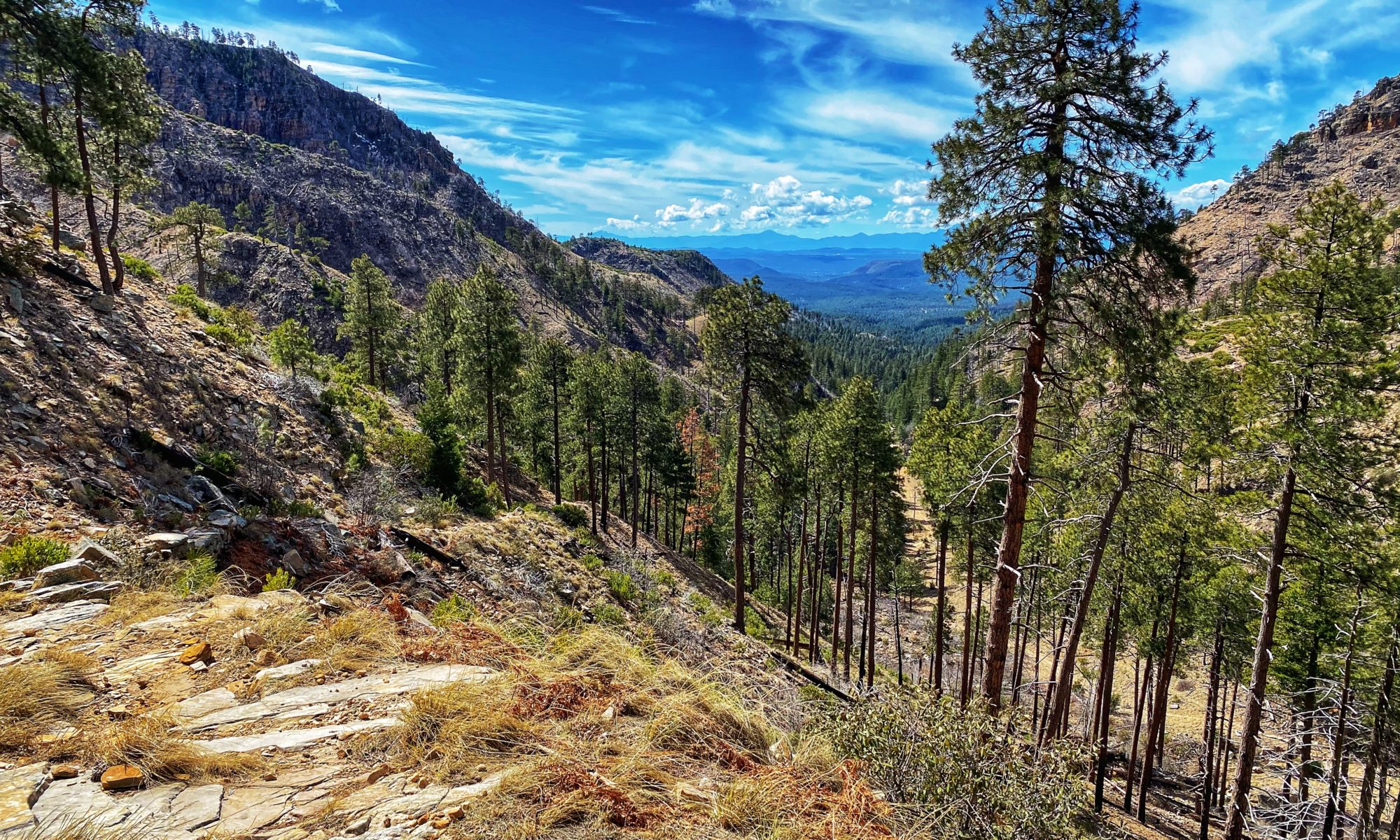 Hike On and I had a parting conversation over rehydrated breakfast this morning. He had only intended to stay a couple nights out and was heading back to the Pine trailhead where his camper and a couple gin and tonics would be waiting for him this afternoon. He was enjoying an extended stay in Arizona, just driving, hiking and camping wherever he felt like it. I envied his nomadic opportunity. Before I left, he gave me his phone number and told me to call him if I got stuck or needed a ride into town. I doubted I would, but I sincerely thanked him for being kind, and such good company.

From camp at Bray Creek, it was a six mile walk to the Washington Park Trailhead. The East Verde River flows through here, but it didn’t look anything like the raging force that held me up for a couple days at the LF Ranch.

Washington Park is a historical site, with a sign explaining the significance of the Mogollan Rim as a geographic and cultural barrier between southern and northern Arizona. The Native American tribes of the Hopi, Hohokam, Salado, Mogollon and Apache used trails onto the Rim for travel, trade and to establish their homes. In the late 1860s, settlers arrived and the United States military used the trail to attack the Apache. The trail was later renamed the Colonel Devin Trail, and this was the route I was about to take to get up onto the Rim.

The trail was steep, and I stopped often to turn around and see how far I’d come. The end of the climb and the top of the Rim marked the end of this particular passage of the trail called the Highline passage and the beginning of the Blue Ridge passage.

A marker described the Battle of Big Dry Wash as the stereotypical heroic military defeats the murderous Indian, and someone apparently disagreed with the depiction.

Plenty of cold water flowed by and I found a nice spot to air out my feet and have lunch. After lunch, I headed up out of the canyon. The trail widened and flattened, making for easy walking. I queued up a bunch of podcasts and cruised.

At mile 490, I came to East Clear Creek. The creek itself was flowing higher and faster than the previous year, according to comments in the Guthook app. It wasn’t as frightening as the East Verde River had been, however. The water made it up to the middle of my thighs but I made it across without thinking that this might be my last day on earth, which was a relief.

Just before reaching the creek, the trail had taken a steep descent and during that hike down I felt a strange sensation in my right outer shin. Every downhill step thereafter caused sharp pains to shoot from my knee down to my ankle. The steep ascent out of the creek bed didn’t cause me any problems, but any downhill grade after that became increasingly more painful to navigate. Whatever injury I had just sustained was exacerbated by the now soggy condition of the trail. Standing water covered the trail and the surrounding fields so that there was no way to avoid walking through ankle deep water and sticky mud. My feet went numb and I spent the next five miles swearing loudly at the trail. I don’t think it cared.

By the time I reached the Blue Ridge campground, I was having a hard time not giving in to self-pity. I could barely place any weight on my right leg, I was cold and wet, I ran out of fuel before I could get any water to boil for dinner, and it had started to snow. I had a little bit of cell service, and text messages had come in from my mom, asking me to come home because of the beginning of the Covid panic. She was worried that flights would be cancelled and I wouldn’t be able to get home. I was feeling overwhelmed and lonely. I called Tim and told him that I was thinking about coming home, but I decided to get some sleep before making any decisions. I ate my cold dinner and buried myself in my quilt, listening to the snowflakes hit the tent and waiting for warmth to set in.