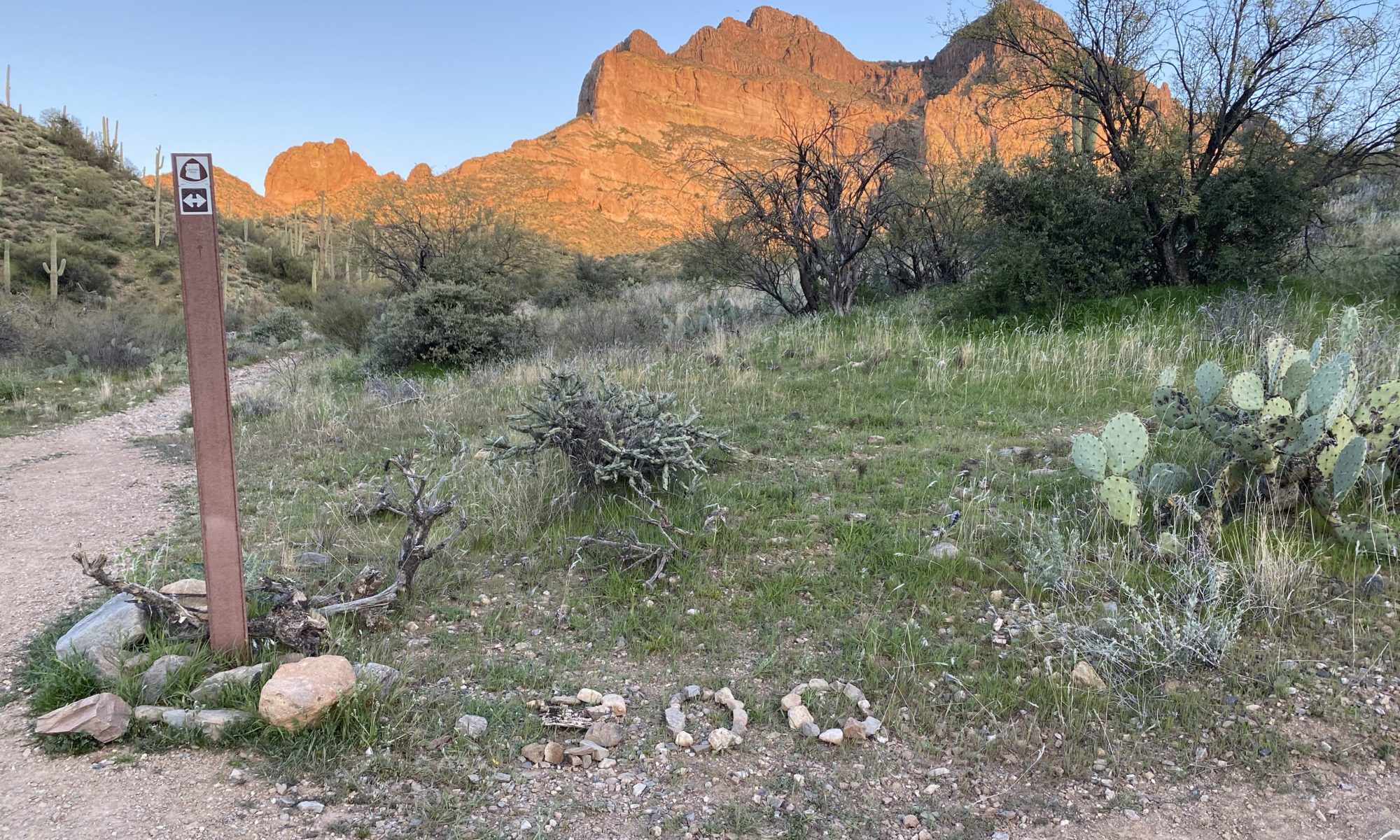 Cowbells clanged in the field between my tent and the river all night long, and between that and my inability to get more than a couple good hours of sleep when I’m camping by myself, I was groggy and out of sorts this morning.

The trail climbed up from its lowest point at around 1600 feet and followed the side of a canyon I couldn’t find the name of on my map. As soon as the sun came over the mountains, it got hot and no clouds ventured out to provide any shade.

Today was picturesque, however, and I was happy for the many chances to stop on the uphill climb to take dozens of photographs of the rock formations offset by the intense blue skyline.

At some point in the morning, I passed two ladies who were headed back down to the river because one of them had injured a knee and couldn’t hike all the way to the picket post trailhead, which was where I was hoping to make it by the evening. Since ATVs made a regular appearance along the river, they thought they would be able to find someone to get them off trail. I felt badly for them that their hike ended that way, but also felt secretly relieved that I made it this far with my joints intact. In hindsight, I feel like I should have done more to help, but often when it comes down to it, I’m a pretty selfish person who doesn’t think past my own needs until waaaaaay after an opportunity to help has passed. I’ll try to be better next time.

I unintentionally timed my lunch for the spot on trail that houses the rainwater collection tank, which is a beautiful (to those dying of thirst on a dry climb in the middle of the day), alien-looking structure installed by the Arizona Trail Association that collects water for beings that aren’t cattle (for a change). I spread out all of my gear to dry and enjoyed a seemingly endless supply of potable water from the spigot on the North side. I had it all to myself, and was enjoying a little time in the sun nearly au natural – I had my undies on, don’t judge – until Funnybone ambled up the hill and I had to scramble to throw the rest of my clothes on. I don’t think he noticed, and now knowing Funnybone a little better, I am positive he would have said something if he had! At any rate, it was nice of him to show up and liven up the last half of my lunch hour.

After lunch at the tank, I headed downhill, continuing through the Tonto National Forest and passing several striped outcroppings on my way to Picket Post Mountain and the trailhead where I would stop for the night.

The afternoon was hot and dry and ideal for plugging in the headphones and marching through blazing sun, hoping my skin wouldn’t burn too badly.

I reached the trailhead as the sun was setting. There weren’t very many people parked there, so I didn’t feel too weird about setting up my tent and cooking next to the parking lot. I called the trail angels in Superior, Al & MJ, and set up a ride into the town for the morning. They offered to come get me that evening, and mentioned that my friend Mustachio was there, but I was already in my pajamas and boiling water for my ramen, so I decided I was fine where I was at. Not long after I hung up the phone, Funnybone came rolling in to camp, and I was glad to spend dinnertime listening to him crack jokes and fill in some of his life story as the last of the sunlight crept up over Picket Post Mountain and disappeared from view.